My iPhone photos from last week consist of either a picture of a box we shipped to family back at home for Christmas or a picture of Andy opening a door to our beer advent calendar.
Just to save me ~10 minutes of uploading to WordPress, I’m just going to go ahead and skip to our weekend in Bastogne & at Christmas markets. Hope you don’t mind. =)

Friday evening, after Andy got off work, we drove up 2.5 hrs to Luxembourg for the night. We stayed at a small hotel called the Hotel Restaurant Braas (it was more like a bed and breakfast type of place) that was conveniently located only 25 minutes from Bastogne, Belgium.

Saturday morning, we woke up early and headed into Bastogne to participate in the Battle of the Bulge march. A historic march that retraced the footsteps of the the soldiers who fought in this WWII battle. Participants could choose to do a 7k, 13k, or 20k walk, all which had reenactors along the paths.
Andy and I have been pretty excited about this walk because prior to this day we watched the miniseries Band of Brothers. We were actually hoping for cold and snow to give us the full experience but instead, we got temps in the 40’s with lots of rain and mud…LOTS of mud. The Remo family met us up at registration and walked the first couple of miles with us until they split to walk the 13k, while Andy and I walked the 20k path. I do not know any other family that would’ve toughed it out like Remos through that rain & mud – 3 kids & a stroller through a 13k mud trail. They are tough!

Picture of our fancy badge, fliers, map, and tickets for a hot drink. 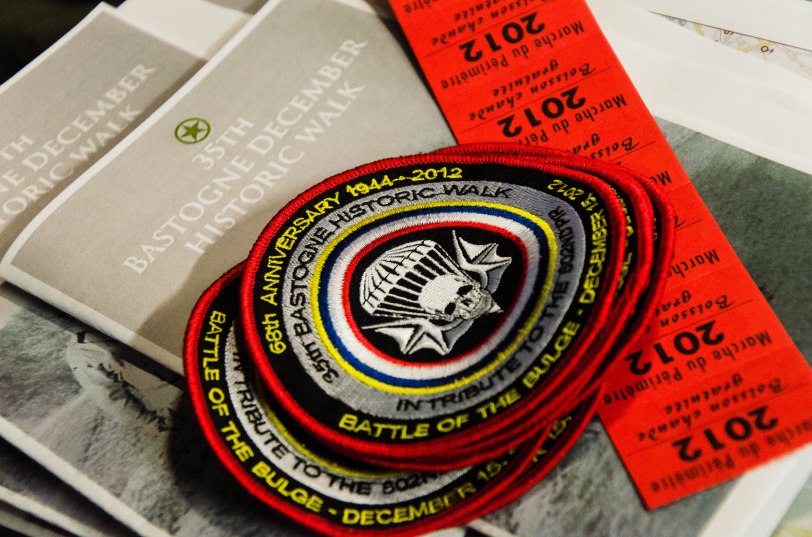 Beginning of the walk… 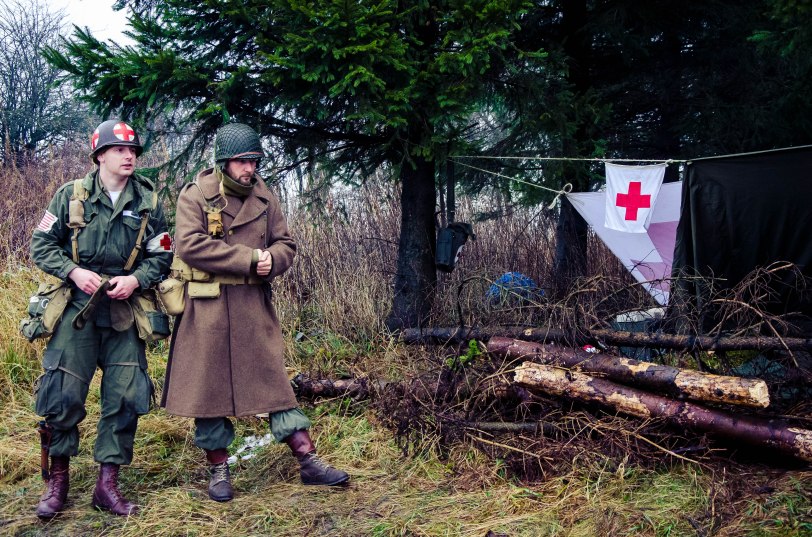 Mud wasn’t too terrible in the beginning and there were a lot more people walking with us before we split for the 20k walk. 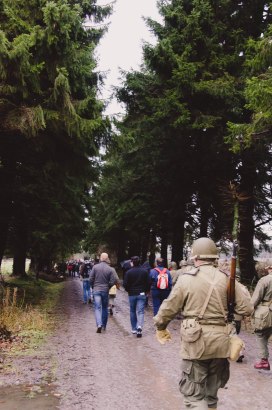 Soldiers in a foxhole securing the perimeter of Bastogne. 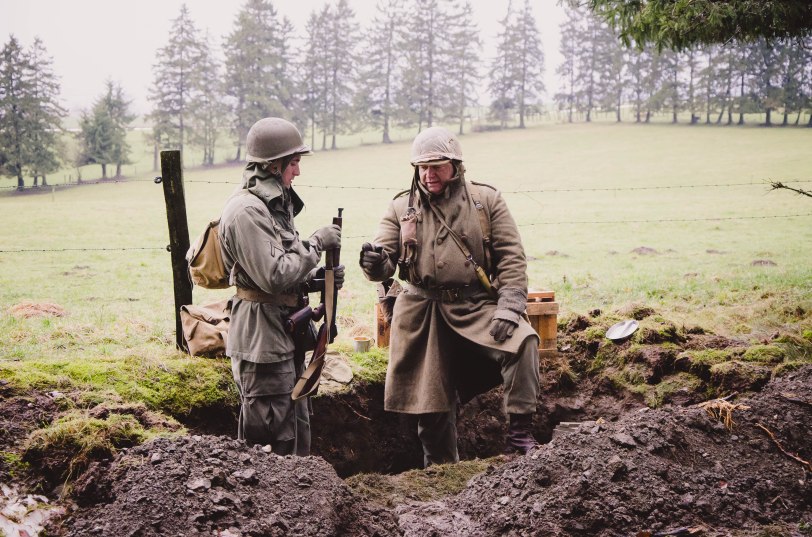 Julie, Gage, and Gavin taking a quick picture next to a couple of jeeps. 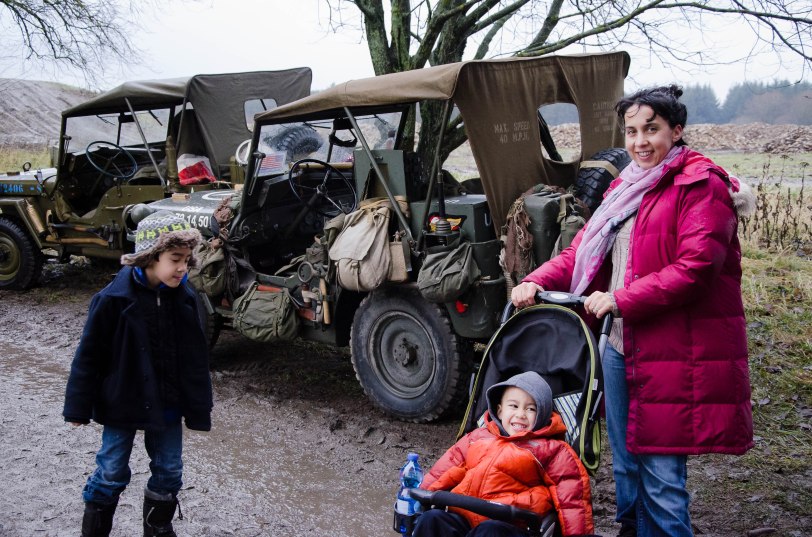 Walking with a group of soldiers. 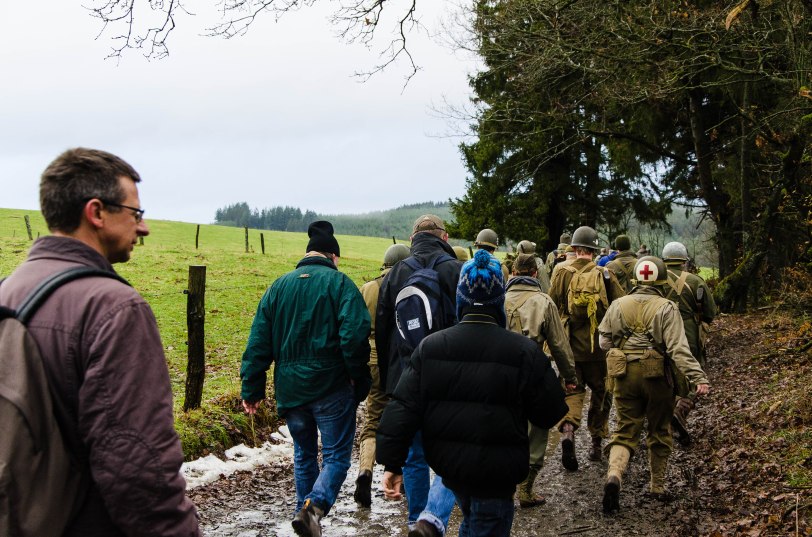 Another fox hole deeper in the woods. 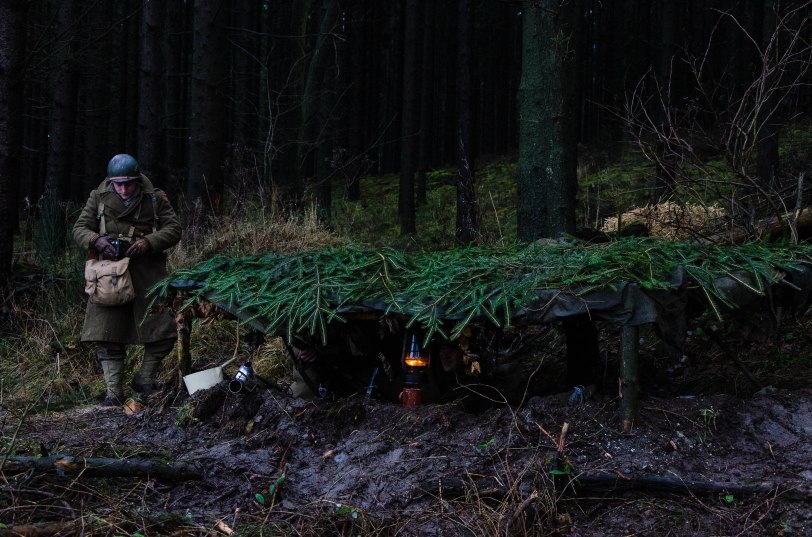 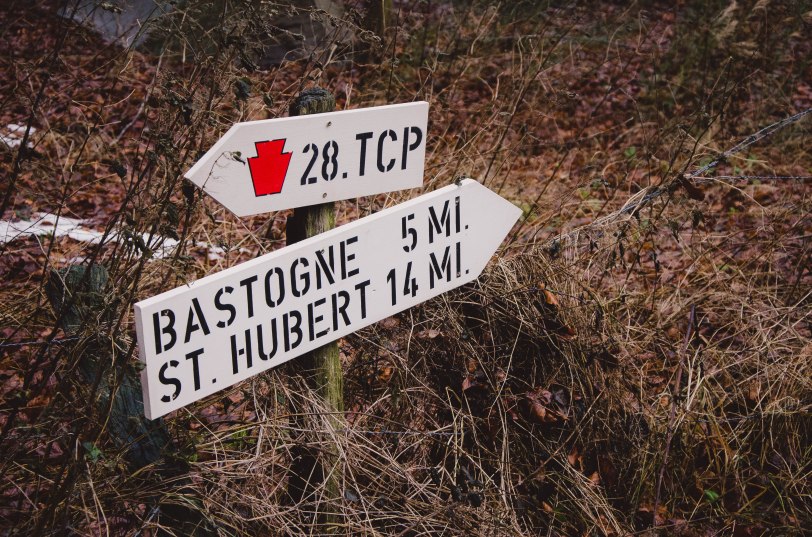 The soldiers lining up to head back out onto the trail after a quick break. This is also where we parted ways with the Remos. 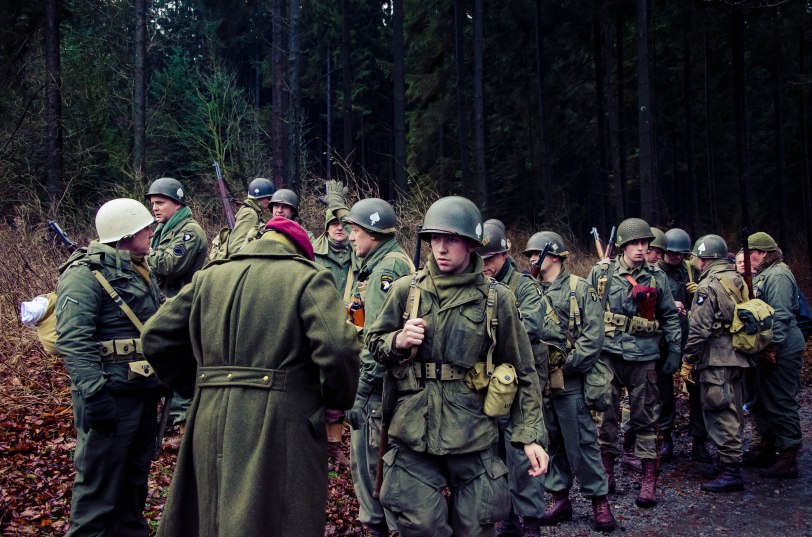 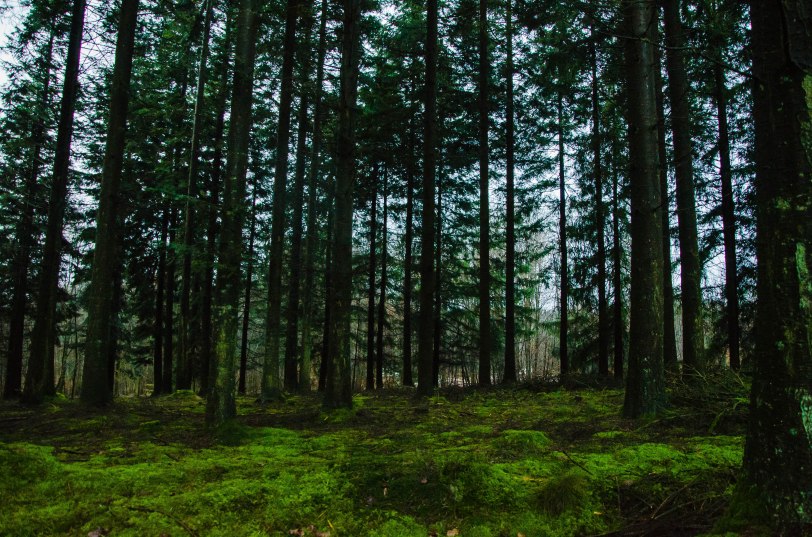 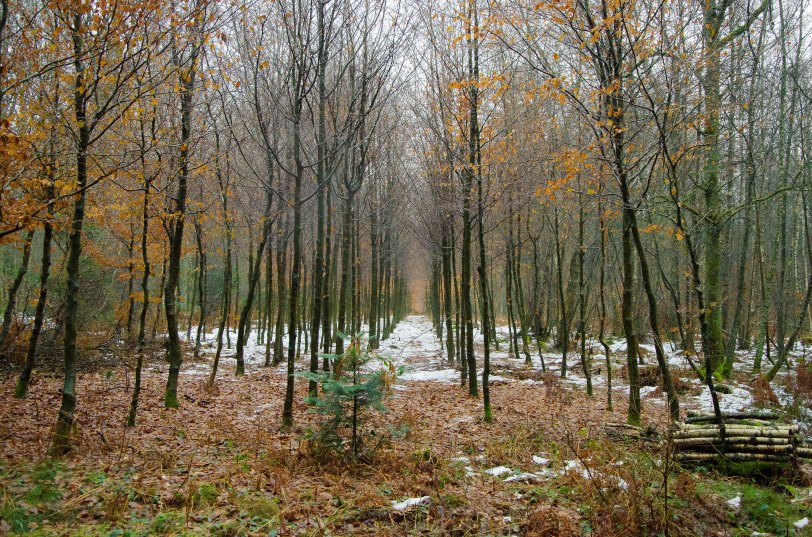 The 20k walk was a bit lonelier & muddier. 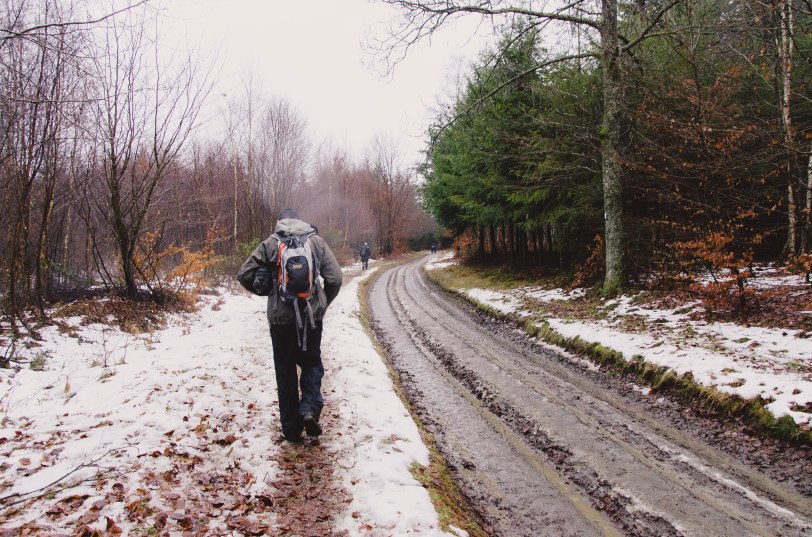 Creepy… do you see what I see on the far right? 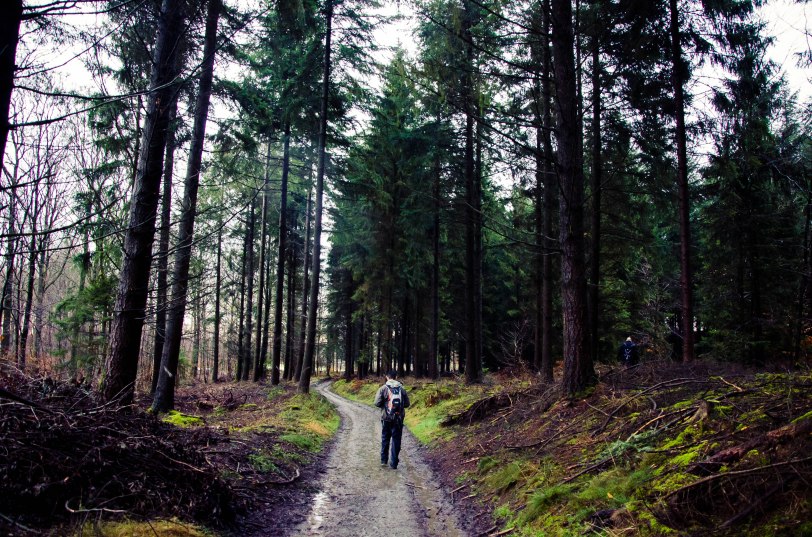 After several miles through the woods, we reached a neighborhood and finally saw some more soldiers. 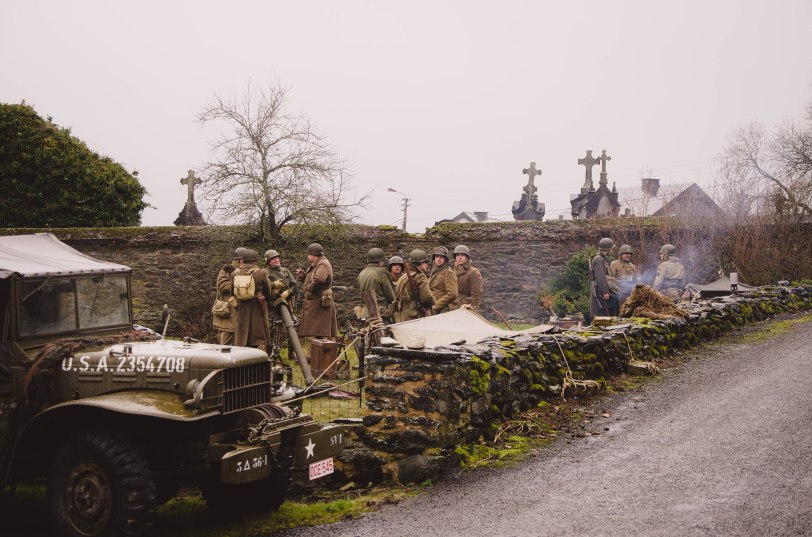 Officers shouting orders to the soldiers to fire. 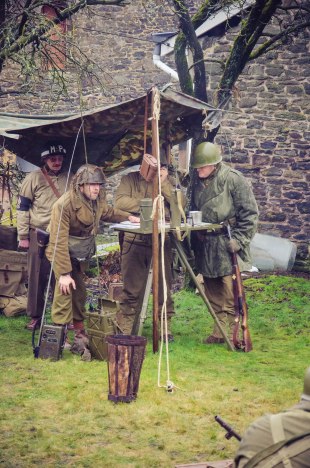 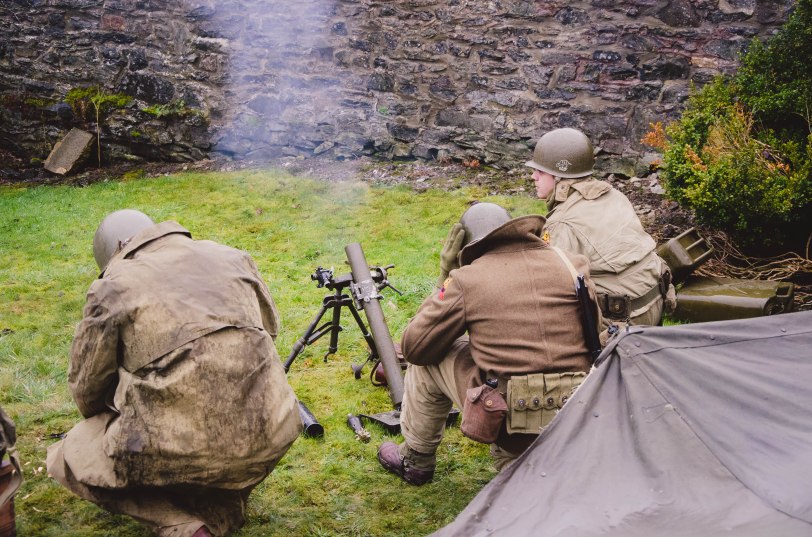 After that, there wasn’t much to see other than the surrounding land. The mud was really challenging us so I put my camera away for the rest of the walk. I must be out of shape because I swear, my marathon felt easier than the last half of this walk!
Snapped one last photo when I saw this pretty tree. Although, I think I was more excited about seeing pavement ahead. 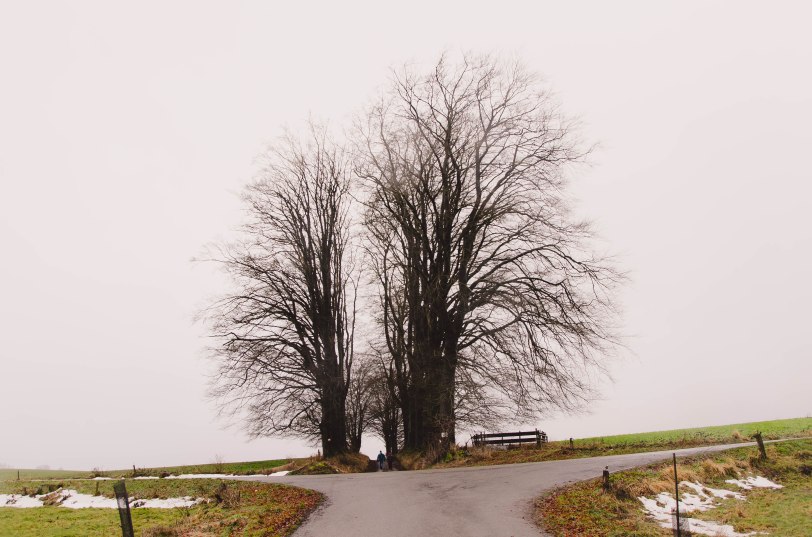 After we finished the walk, Andy and I grabbed some food from a local cafe and headed out to Bernkastle Kues to stay for the night. We were just there 2 weeks ago but it was neat to see a few changes and fireworks.
If you look at my previous Bernkastle Kues Christmas market post (click here to see picture), I had taken a photo of this house before with the advent calender shutters. We went by it again and saw that they had changed/flipped the dates that had passed. 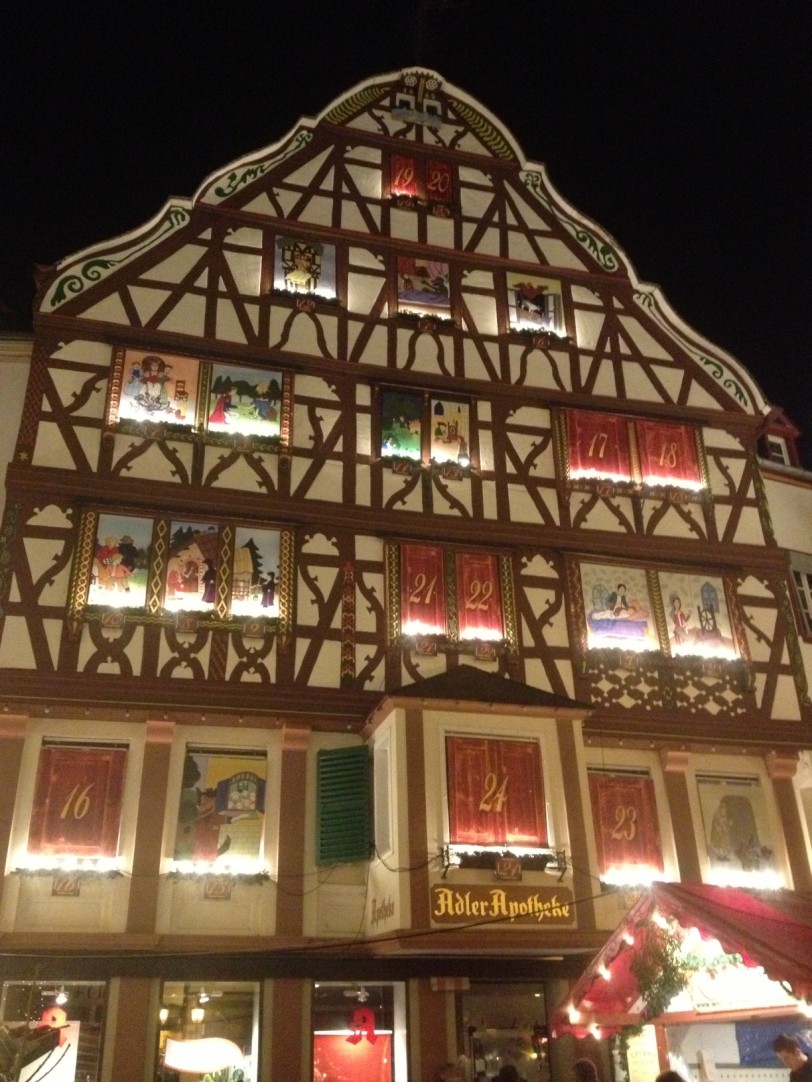 Sunday, we drove an hour from Bernkastle to St. Wendel for another Christmas market. I heard that this market was supposed to be one of the best and it definitely was. It was our favorite out of all the ones we went to so far. 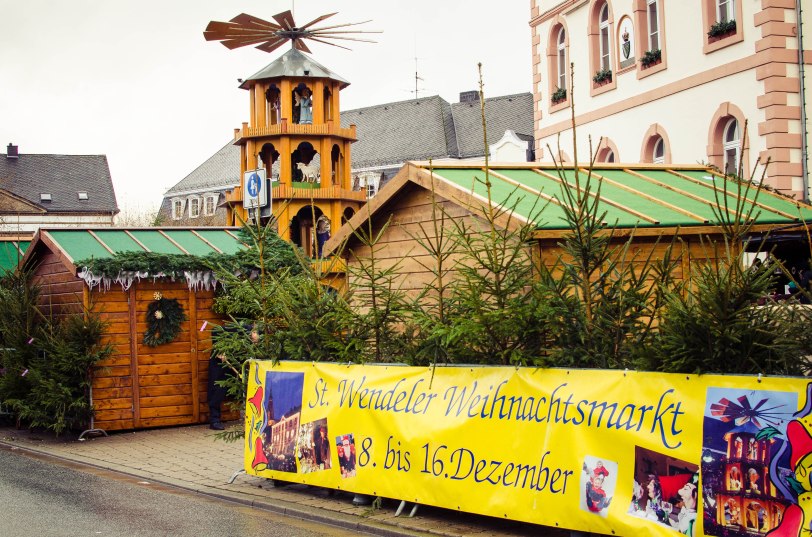 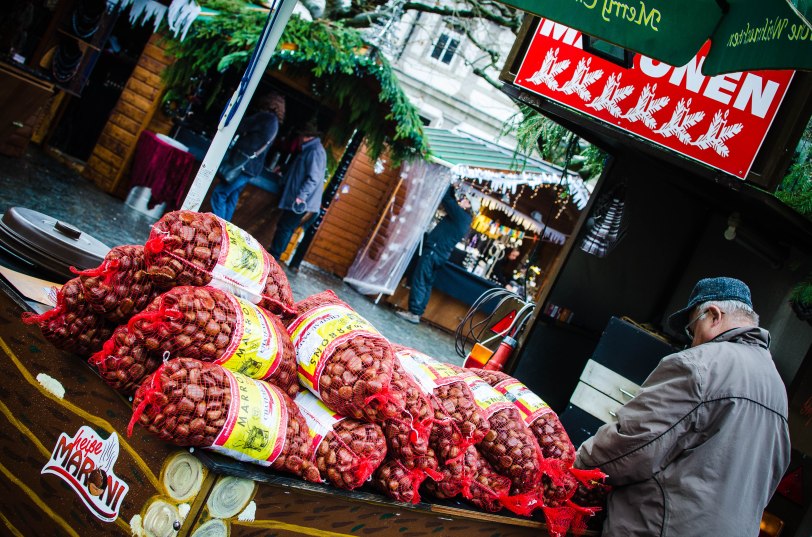 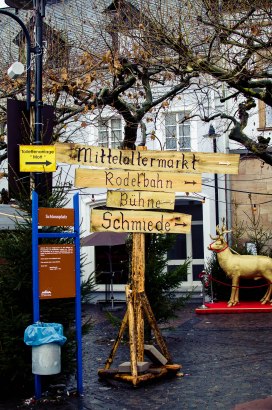 I think I have a weird obsession with moose decor… 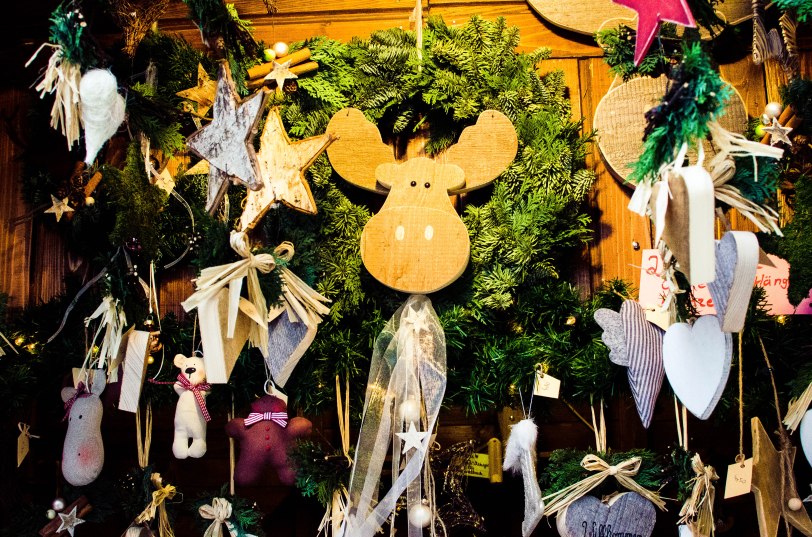 Since we do almost nothing without the Remos, Andy and I had a couple drinks in a neat stand that was built like a mini ski lodge until they arrived. The man who served us drinks was really sweet and let me try this liquor shot that came in a tiny glass boot with a peach inside. It was delish! We bought several more to take home with us. 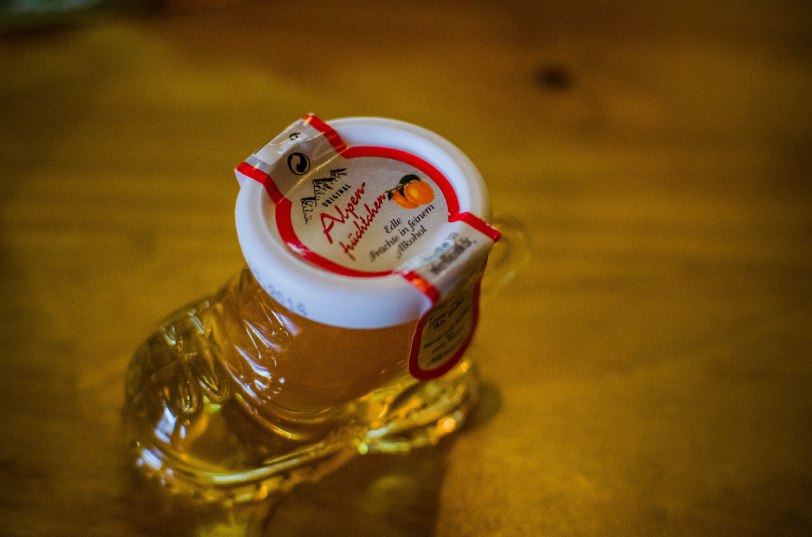 Snapped this adorable photo of Andy holding Gage’s hand (the youngest Remo) walking through the market. This kid almost never leaves his stroller so it was really cute seeing him walk with Andy! 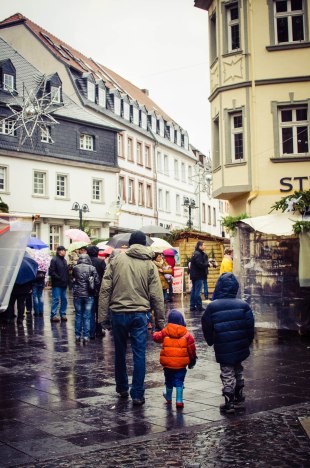 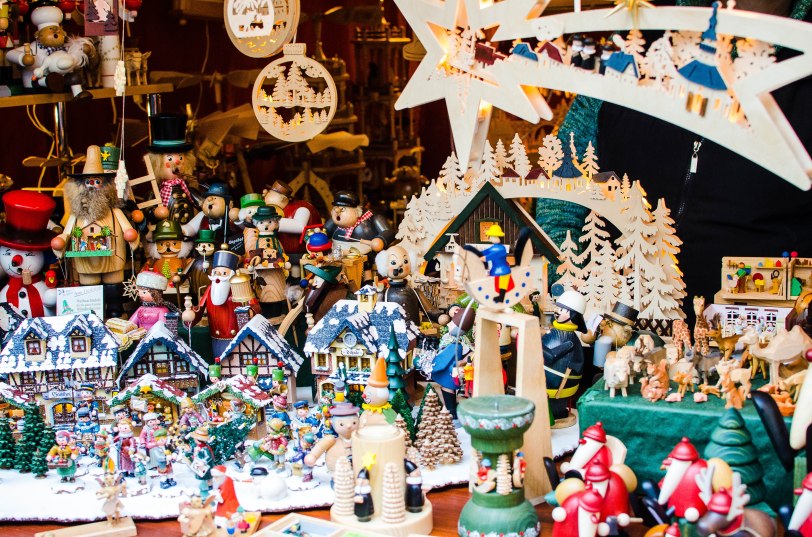 One part of the market that offered puppet shows for the kids had a display of mini puppet houses. They were quite freaky looking but the odd scenes really kept my attention. They were all pretty similar to this one – I think this is a Roman bath house. They have tons of these spas in Germany. Both men & women completely nude! 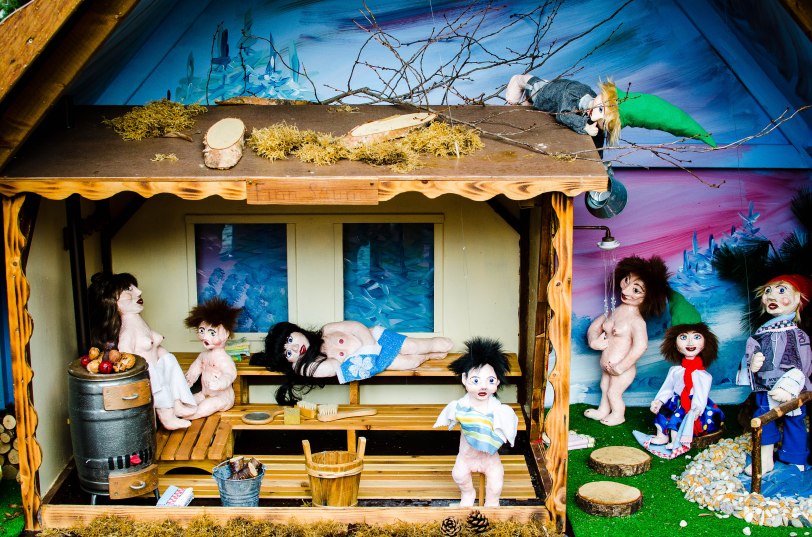 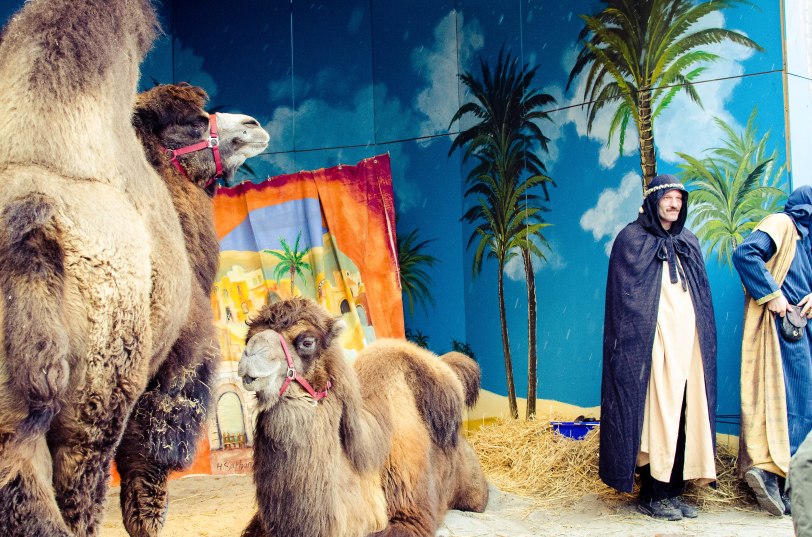 We walked around some more to the other parts of the market, had lunch, and called it a day.

Monday, I made these yummy little cake balls for the Cardiology department’s holiday party on Tuesday. 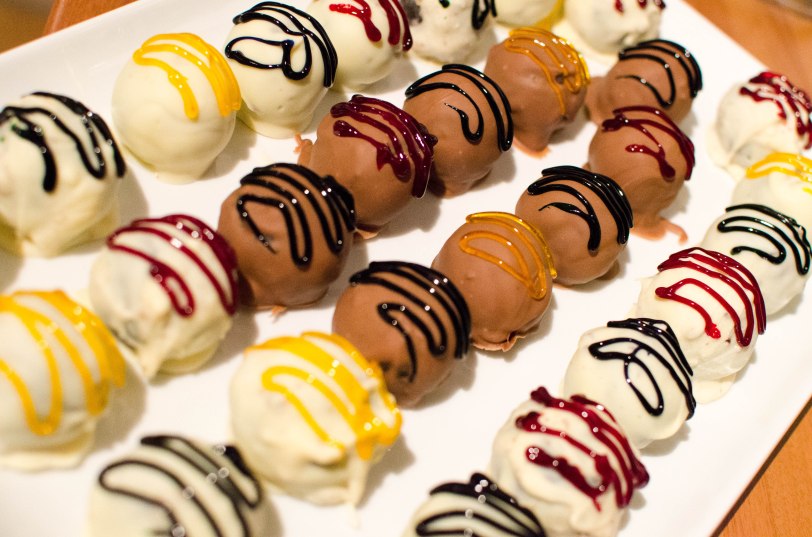 Tuesday, spent most of the day at Andy’s department holiday party. One of their patients came by as Santa to pass out gifts for the kids… 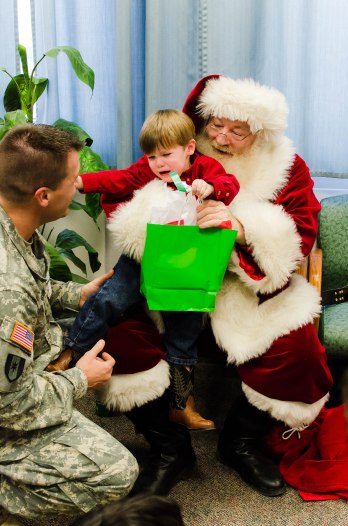 …and photos with the staff. =) 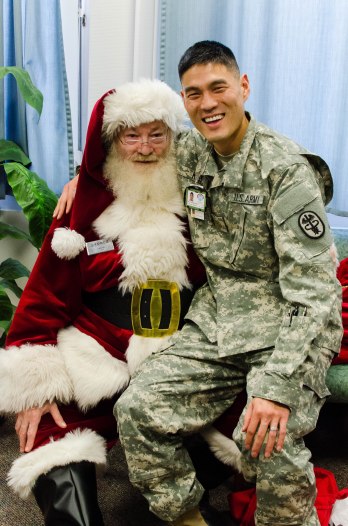